The Narrativist Podcast was founded in 2017 by Jack Hudson and Charlie Kerson as a platform to present new works of audio drama and interview inspiring people around themes of making a difference. Since then, the podcast has roped in a number of associate artists but we’re always looking for more contributors. Find out more about how you can get involved here. 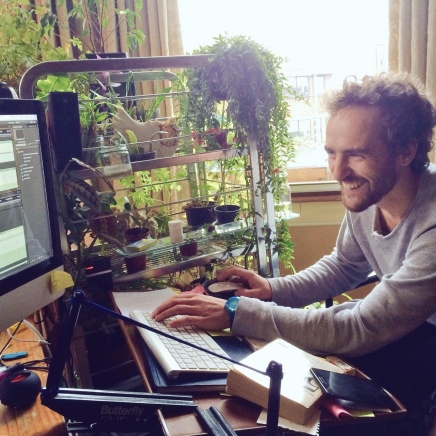 Jack has spent much of his life taking things too seriously, a gift he’s passionate about imparting on others through the mediums of theatre and ethical living.

At various times an actor, producer and writer, Jack is now settled in the National Theatre’s planning department, having worked along the way with companies such as Secret Cinema, Pennyworth Productions and Good Chance Theatre.

Like these companies, he believes in the power of theatre to capture our world and inspire audiences to play their part in shaping it for the better.

Charlie’s lifelong obsession with emotions and the human narrative has taken him on a journey with its own complex narrative. From reading psychology as an undergrad to postgraduate training as an actor and life as a performer in the UK and abroad and now to The Narrativist.

Alongside his work with The Narrativist, he is passionate about engaging people with environmental narratives, from food growing to conservation, green tech and lifestyle choices, through his work as an urban plantsman (under the alter-ego Rob and the Plants) and the comedy series Stewards of the Animal Kingdom.